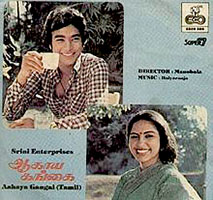 Agaya Gangai is a 1982 Indian Tamil film, directed by Manobala, starring Karthik and Suhasini in lead roles. The film had musical score by Ilayaraja and was released on 1982.