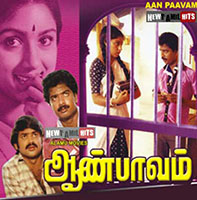 Aan Paavam  is a 1985 Tamil language comedy film directed by Pandiarajan. It was his second directorial venture and first as actor. This blockbuster movie of 1985 became the best comedy movie in the career of actor-director Pandiarajan. The film was remade into Telugu as Naku Pellam Kavali (1987) starring Chandra Mohan and Rajendra Prasad. The film was remade in Kannada as Rama Krishna with V. Ravichandran and Jaggesh. Also it was remade in Marathi as “Chal Lavkar”.