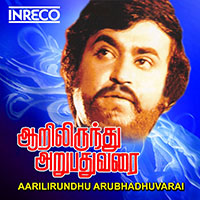 Aarilirunthu Arubathu Varai Story: The story begins with a family man (Thengai Srinivasan) who has a wife and 4 children. He values the present moment and wants to lead a luxurious life along with his family. He spends a lot of his earnings rather than saving. Suddenly, one day, when his eldest son is just 6 years old, he dies in a road accident after getting heavily drunk. The eldest boy, Santhanam (Rajnikanth), visits his father’s boss and asks for a job. He gets a job in the printing press and learns a trade running the printing press. He also does many other odd jobs. He aspires to give his siblings the comfort that his father wanted for his family.

All four children grow up and their mother dies suddenly. While Santhanam continues working in the print press, his siblings go to college. He seeks the help of his friend (Cho Ramasamy) and his boss, asking them for money as and when he requires for his siblings’ studies. Santhanam and a co-worker fall in love but she breaks off when she comes to know of his numerous debts and continuing responsibilities towards his siblings. Santhanam’s sister falls in love with a rich man and Santhanam feels he needs to give a suitable dowry to get his sister married to the rich man. His younger brother advises him not to give a dowry as the groom did not ask for it and also because they cannot afford a dowry. Santhanam goes ahead with the dowry and finds he is short of money, despite help from his friend and boss. In desperation, he marries Lakshmi (Phataphat Jayalakshmi) when he is promised a sum of money. But it turns out to be a false promise. He then goes to a loan shark to obtain money. Later his sister ill treats him during his visit to their home mocking at his cheap gift to her new born baby.

Santhanam’s younger brother (LIC Narasimhan) graduates and gets a good job. Santhanam believes that his brother will help improving their family condition. But he doesn’t help out Santhanam financially and becomes selfish purchasing expensive dresses and a watch only for him. He says that Santhanam’s money problems were brought onto himself. Santhanam and his brother get into quarrel and his brother leaves the home and gets married to his friend. Santhanam’s situation gets worse with his friend Cho losing his job and his boss falling ill. The printing press is now managed by the son of his ex boss who does not like Santhanam as he has borrowed so much money from his father. Santhanam’s new boss ask him to repay the money he owed to his father or else resign his job. Santhanam loses his job and he half-heartedly attempts to get help from his well-off siblings and fails. Unable to pay rent, he, his wife and child move to a slum. Santhanam gets a job as a proof reader, his wife earns some money doing some sewing and they have another child. Santhanam develops an interest to write and completes his first novel. His friend Cho, who has also recovered, publishes it. On the day that the book is available, Santhanam’s wife leaves her kids at home to go to the market. In her absence, a fire occurs in the slum area. She rushes back to save her children and is badly burnt in the fire. She dies and Santhanam gets a sum of money from an insurance policy that she had secretly taken up. His friend suggests that they produce their own newspaper and this goes well. Santhanam becomes a popular novelist, winning a writer’s award and he becomes rich. His siblings also unite with him. He is now 60 years old and he doesn’t reject them, he knows though, that it was his wife who was there for him through the hard times. Santhanam’s both children leave to abroad for their higher education. The movie ends with Santhanam sitting in a chair looking at his wife’s photo and thinking about the opportunistic behaviour of his siblings.