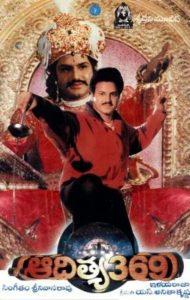 Aditya 369 is a 1991 science fiction Telugu film directed by Veteran Singeetam Srinivasa Rao and produced by Anita Krishna on Sridevi Movies Banner, presented by S. P. Balasubramanyam. Starring Nandamuri Balakrishna, Mohini in the lead roles and film’s soundtrack was composed by Illayaraja. The film recorded as Blockbuster at the box office. This movie was later dubbed in Tamil as Apoorva Sakthi 369 and in Hindi as Mission 369. Aditya 369 collected 9 crore rupees, at the time a new record for the Telugu film industry. It is the only sci-fi film ever released in Telugu cinema up till date. The film was later remade in Hindi as Love Story 2050.

Story: Aditya 369 movie begins with a scientist Prof. Ramdas (Tinnu Anand) doing vigorous experiments to invent a time machine at his home laboratory. After tremendous effort eventually he becomes successful. His daughter Hema (Mohini) and her fiancé Krishna Kumar (Nandamuri Balakrishna) accidentally get into the time machine and visit the past (time of Krishnadeva Raya’s Empire). At another instance, the couple gets ended up in fictional future set up by the time machine wherein, the world is about to get destroyed through radiation effect after the end of Third World War. The story revolves around one more important aspect, the Krishnadeva Raya’s Empire – the diamond in a highly secured museum. A high profile thief Raja Verma (Amrish Puri) has a queer hobby of burglary of expensive diamonds from all over the world museums. He makes an attempt to rob the diamond in the present time, which was witnessed by a school kid (Tarun Kumar) on his school excursion to the museum. He is trapped inside the museum and happens to see the robbery happening in front of his eyes and the kid manages to escape from the robbers and gets rescued from the museum by Krishna Kumar.