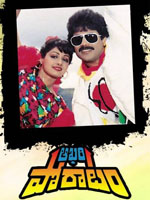 The film is based on the novel Aakhari Poratam written by Yandamuri Veerendranath. The film was premiered at the 12th International Film Festival of India in the mainstream section.