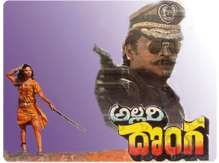 Allari Donga is a 1993 Telugu crime film directed by Parthiban remade of Ulle Veliye tamil movie Allari Donga features Parthiban and Aishwarya in lead roles. The film, produced by Seetha, had musical score by Ilaiyaraaja and was released in 1993. The film proved to be a successful venture at the box office in spite of its vulgar scenes and double meaning dialogues.

Story: Gajendran (Parthiban) is a fraud and lives in a slum. His father was a laborer and a communist activist. His superior killed him and Gajendran’s mother, Rajalakshmi (Sabitha Anand), was sent to jail for her husband murder. Gajendran was born in jail.

Gajendran falls in love with Meena (Aishwarya), a police officer. MLA Muthulingam (Rajeev) burns his slum to collect some votes. Gajendran, to fight the unfairness against the poor, takes the IPS exam and passes it. He becomes a corrupted police officer. Shenbagam (Shenbagam), who is in love with Gajendran, saves him when he’s accused of corruption and she then commits suicide. Gajendran gets married with Meena and he finally decides to fight against the corruption.