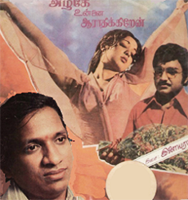 Azhage Unnai Aarathikkiren Strong: The movie centers around the life of Vani (Latha), a middle-class woman who lives with her brother, his wife and their chirpy teenage daughter Vasanthi (Subhashini). Victor (Nagesh), a mechanic, is their family friend. Victor introduces Vasu (Vijayakumar) to Vaani’s family when they are looking for a tenant and Vasu moves into the top portion of their house. Vasu is deeply in love with Vani but is disappointed to find that Vani is already romantically involved with Venu (Jaiganesh). However, Venu turns out to be lecherous and deceitful and he vanishes from Vani’s life after being physically intimate with her one night after a party.

In a double blow to Vani, both her brother and his wife are killed in an accident. Vani turns despondent and takes to sleeping pills but recovers with Vasu’s assistance and starts taking care of Vasanthi as well. Vasanthi soon falls in love with Vimal(Prakash), son of a rich businessman. To help Vani recover fully, Vasu asks her and Vasanthi to accompany him to Goa where he has been deputed to on duty for a couple of months. While in Goa, Vasu reveals his true feelings for Vani and desires to marry her even after she reveals her past affair with Venu.

Vani asks Vasu for some time to decide, but is thrown into a turmoil when she suddenly encounters Venu in Goa. Venu convinces her that his disappearance was circumstantial and he never intended to deceive her and Vani agrees to get back with him. Vasu, though his hopes have been dashed, wishes her well. However, the conniving two-faced Venu is just lusting over Vasanthi and plans to use Vani to satisfy his quest. What happens next forms the rest of the story.