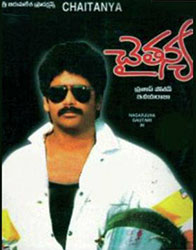 Story: Chaitanya, (Akkineni Nagarjuna) is the chief mechanic for the upcoming Roots Challenge 1991 Automotive rally race – which starts via the route from Chennai coast to Goa coast, a route which is noted for illegal drug trade and arms trafficking. Retired Major Harischandra Prasad (Girish Karnad) is the chief guest for the rally, his daughter Padmini (Gautami) also competes for the Roots Challenge Trophy.

Chaitanya’s journalist friend Sudhakar (Chinna) witnesses the murder of the city D.I.G. in a park. The D.I.G.’s murder happens to have been planned by a high profile unknown criminal. Later, Sudhakar’s murdered by a gang near his garage because he witnessed the murder of the D.I.G. Chaitanya finds himself beaten by the gang after he comes to the assistance of Sudhakar. When he regains his senses he finds himself with a revolver in his hand and in police custody, arrested and charged with the homicide of the friend he tried to assist. With evidence pointing toward his guilt, he has virtually no defense and may well spend the rest of his life in prison or be hanged. He manages to escape from the prison with the help of Chaitanya’s garage assistant, Golconda (a drunkard), through the journalist’s friend (Joseph) in a water tanker. Disguised as the journalist’s friend, the high profile criminal’s henchman is hidden in the tanker.

The police commissioner (Kota Srinivasa Rao), who is a close associate of Harischandra Prasad, attempts to solve the mysterious murder of D.I.G. and the journalist. The criminal’s henchman plans to blast the water tanker and kill Chaitanya who flees from Srungavarapukota prison in the same water tanker. But, after a battle with the henchman inside the water tanker, Chaitanya escapes and jumps from the water tanker into a lake and the henchman dies in the water tanker explosion. Police send Chaitanya’s case to CBI as they come to the conclusion that it was Chaitanya who was killed in the explosion. Chaitanya gets to participate in the One Halt Race by joining at a milestone on the route, in the guise of the garage assistant’s race car. He finds out that the photographs of D.I.G.’s murder caught by his journalist friend are hidden in one of the three cars of the rally. In another twist, Padmini happens to drive the car in which 1 photograph was hidden.