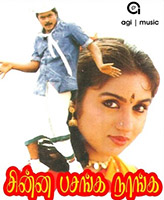 Chinna Pasanga Naanga Story: Muthukaalai (Murali), an angry young man, returns to his village after studying in the city. Ambalam (R. P. Viswam) is a respected panchayat headman, since his brother got married with another caste woman, he hates their family. Poochandu (Saradha Preetha), Ambalam’s niece, falls in love with Muthukaalai. In the meantime, Muthukaalai’s cousin Marikolunthu (Revathi) who is crazy about Muthukaalai comes from her village to marry him. One day, the storm devastates the entire village, destroying the poor villagers’ house. The villagers begg Ambalam to let them in the temple until the storm calms down but Ambalam refuses point blank. Poochandu’s mother breaks the temple’s padlock to save the villagers. The next day, at the village panchayat, Ambalam condemn Poochandu’s mother to tonsure and Poochandu to become a Devadasi. In anger against this dictatorship, Muthukaalai ridicules Ambalam and he get married with Poochandu. What transpires next forms the rest of the story.