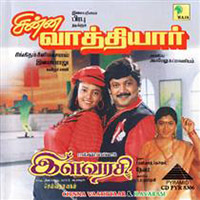 Chinna Vathiyar Story: Prabhu acting in duel role in the film. The story revolves around a professor named Professor Chandramouli (Prabhu Ganesan) experimented on transferring body soul from one body to another. Professor Chandramouli is married to Janaki (Kushboo). He got help from a student Aravind (Prabhu Ganesan) who is a bright student and a star in the school. The story flows when the two souls of professor and Aravind transferred and it makes uncomfortable to both parties and their girls. Meanwhile, a wealthy girl-abuser Baba (Nizhalgal Ravi) took professor’s favorite student and sold her to a gang. However, soul changed professor and Aravind came to rescue her, where Baba flee from the police. Baba came to know about the miracle medicine that produced by professor to change souls and when soul changed professor and Aravind came to correct their souls at a cemetery. Professor gets changed, but Aravind’s soul went on to a cat. Baba came quickly and hit professor and Baba changed his soul to Aravind’s body. Cat with Aravind’s soul put into a nearby well and he flee with the miracle medicine. The new Aravind behave very differently and engaged in many bad activities. Finally, professor get to know about the change that happened. He finally found the miracle medicine which was hidden in the worshipped anthill. At last after series of events, Aravind’s soul released from cat and Baba’s soul trapped within a chicken. In between these scenes, there are some comedy scenes between Josiyar (Goundamani), who is married to two wives and his friend Senthil. , which is a very shortened version of the (Madhu +2) stage play which is written by Crazy Mohan who also wrote this story.