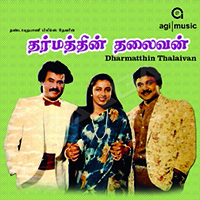 Dharmathin Thalaivan Story: Balu (Rajinikanth), an absent minded lecturer in a college, and Sumathi (Suhasini) love each other and plan to marry soon. Balu lives with his younger brother, Raju (Prabhu), and Raju already calls Sumathi “Anni” (sister-in-law). Raju is a bad student and somewhat a rowdy, spoiled by Balu and Sumathi’s pamperings. Raju keeps getting into fights with a fellow student (Nassar) and as a result keeps getting into trouble. When Balu comes to help Raju during one of those fights he is killed by Nassar. Sumathi goes into a trance, dons the garb of a widow and does not plan to marry again. Both Raju and Sumathi move to Bangalore. Then one day a look-alike of Balu, named Shankar (Rajinikanth) enters Sumathi and Raju’s life. Guilt-ridden Raju thinks that he has gotten his brother back, and tries to make amends by hiring Shankar, not knowing that Shankar is a wanted criminal, and is looking for an escape route from the authorities. But the electric attraction between Shankar and Sumathi eventually wins Shankar over from his past evil ways. Nevertheless, Shankar can not so easily escape his past. Sumathi is kidnapped in order to force Shankar to aid a kingpin (Captain Raju) by using an international car rally championship as cover to smuggle diamonds. With Raju’s help, of course, good prevails over evil and symbolically, Shanker is wounded protecting Sumathi and as they role free of the shooting and explosions and come to rest, it is seen that Sumathi’s forehead has been marked crimson by the blood of her soul mate. Raju has learnt a heart-crushing lesson in the dangers or excess and frivolity but in the end, there is hope and greater wisdom. In the midst of all this, he also falls in love with and marries Kushboo.