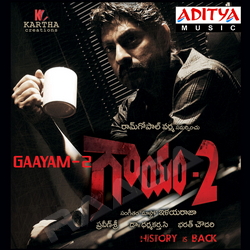 Gaayam-2 Story: Ram (Jagapathi Babu) is a restaurant owner in Bangkok. Ram leads his life happily with his wife Vidya (Vimala Raman) and adopted son Chaitanya. One day, psychopath killers attempt to molest a female worker at Ram”s restaurant. To protect her, Ram shoots them. This rescue turns Ram a hero before the media.

Gurunarayana (Kota Srinivasa Rao) shocks to see Ram who is quite similar to Durga (Jagapathi Babu), an arch-rival, who was declared dead long ago. Gurunarayana’s son Shankar Narayana (Kota Prasad) leaves for Bangkok along with their lawyer Saab (Tanikella Bharani) to find out whether he is Ram or Durga. Shankar Narayana kidnaps Chaitanya. This irks Ram and opens up his identity by injuring Shankar Narayana and killing a person just in front of Vidya.

Lawyer Saab takes away Shankar Narayana back to India. Vidya deserts Ram as he concealed his identity that he was once a killer and goon. But the Bangkok police officer of Indian origin (Jeeva) convinces her that Durga turned Ram and leading a normal and peaceful life only to keep himself off from bloodshed. Then Ram reveals his flashback to Vidya. At a time when it is going to be a happy reunion, again Gurunarayana’s men attack Ram and his family and Chaitanya gets badly injured.

In order to put a full stop to the bloodshed, Ram decides to go to India as Durga and clear off the rivalry with Guru Narayana. He sends Vidya and Chaitu to the police officer’s house and returns to India. What happens next should be seen on-screen.