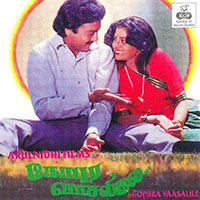 Gopura Vasalile Story: Karthik is a schoolteacher in a local town. He is a bachelor living along with his friends, Nassar, Junior Balaiya and Charlie. Karthik has had a troubled love-life, having lost his lover, Suchitra in a car accident. His friends are wastrels who roam about the town, flirting with the local girls. During one such dalliance with an army officer, VK Ramaswamy’s daughter, Bhanupriya, they are put behind the bars for a few days. Karthik also gets peeved with their behaviour and reprimands them for their uncouth behaviour.

Humiliated, the friends decide to wreak their revenge on Karthik. They collude with Janagaraj, a clerk in a local bank and attempt to trick Karthik into believing that Bhanupriya is in love with him. A few anonymous letters later, the plan comes out successful.

In the meantime, during the course of a few accidental events, Karthik comes across to Bhanupriya as a brave and resourceful hero. Impressed, she seeks his hand in marriage through the help of her father. This sudden development takes his scheming friends aback. They cook up evidences to convince Karthik that Bhanupriya is a whore. The gullible hero believes the subterfuge and cancels the plans of marriage.

Despondent after the twin love failures in his life, Karthik attempts suicide in a hotel. Thinking he is dead, the friends flee the town to avoid police confrontations. It is finally revealed to the viewers that Karthik was rescued by the police later and had reunited with Bhanupriya, after the foul play was decoded. Karthik pardons the friends as they had played some role in developing a love with his wife and invites them to a banquet at his new house atop a hill.