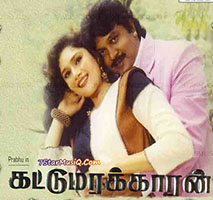 Kattumarakaran is a 1995 Tamil drama film directed by P. Vasu. The film features Prabhu, newcomer Eva Grover and Sanghavi in lead roles. The film songs was composed by Ilaiyaraaja and the film was released on 15 January 1995. The film bombed at the box-office. The film was dubbed into Telugu as Sagar Kanya.

Kattumarakaran Story: Muthazhagu (Prabhu) is a fisherman who works in the catamaran of his boss (Anandaraj). One day, he saves Vaidehi (Eva Grover), a mysterious girl.