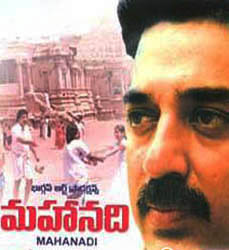 Mahanadi Story: Krishnaswamy (Kamal Hassan) is a widower living happily along with his mother-in-law Saraswathi (S. N. Lakshmi), daughter Kaveri (Mahanadi Shobana) and son Bharani (Mahanadhi Dinesh) in a village near Trichy. Dhanush (Cochin Haneefa); a con from the city has an eye on Krishnaswamy’s prosperity and asks him to join his chit fund business. At first Krishnaswamy is reluctant; however when a rich friend from a foreign country visits house, he too wants to be rich like them. Hence he agrees to Dhanush’s proposal and arrives at the city. However, he is unaware of Dhanush’s tricks and when Dhanush swindles away the chitfund money, the blame is put on Krishnaswamy. and he lands up in jail. He finds that even his future father-in-law Panjapakesan (Poornam Viswanathan) is also in jail for same reason whose daughter is Yamuna (Sukanya) working as nurse. He advises Krishnaswamy not to be angry if the jailor is cruel; as he might be released sooner if he is submissive in the jail. During Krishnaswamy’s tenure in jail, Yamuna takes care of his family. Due to unavoidable situations, his mother-in-law dies and his son and daughter go missing. Krishnaswamy learns this after coming out from the jail suffering unnecessary hardships.

Krishna finds his son, with street-artists and gets his son back. He later finds from Dhanush that his daughter is in Kolkata, at a Red Light area called Sonagachi.

Krishna goes to Kolkata with his father-in-Law and tracks his daughter Kaveri. Unable to bear the grief, he grabs Kaveri and tries to escape, while the pimps there beat him blue. The elder sex-workers/madam make truce and insist that Krishna take Kaveri, while they would work extra-hours to pay the pimps for the loss of Kaveri.

After coming back from Kolkatta, he wants to start a new life with Yamuna, but his friend in Police Muthusamy (Rajesh) tells him that Danush has planned to jail Krishnaswamy further by plotting a murder case against him & would be arrested the next day. Krishnaswamy decides to curb the root of all sin and grief against Dhanush, goes to seek revenge. He comes to know that Dhanush is just a pawn in the big game of cheating. He not only kills Dhanush but also the main person who was behind this game; but at the cost of losing his arm.

Krishna is sentenced to 14 years life-imprisonment and comes out a contented man, to see his daughter married and has a child, son being a grown up man. The movie ends with his son swimming in the river, reminding Krishna his own antics.