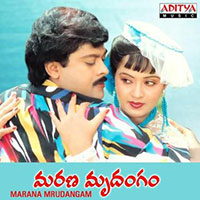 Marana Mrudangam Story: Jaani (Chiranjeevi) runs a small time restaurant/casino with his partner Bhillu (Nagendra Babu). One fine day he helps two women( Radha & Suhasini), stuck with their broken car and gives them a drive. Utpala (suhasini) succeeds in an interview, by remembering jaani’s answer and gets a job as nurse in an hospital.Jaani and his partner also help Radha to get a job by blocking the competitor.One day, Naga babu discovers cocaine in an egg in his kitchen and they start investigating the source of this egg. They discover this to be from Pogaku Subbarao (Gollapudi)’s store. This unfolds the links between a seemingly businessman, gollapudi and underworld Don, Vasanta Dada (Suresh Oberoi). They also offer jobs to unemployed and use them to sell their body parts. Utpala’s unemployed brother Sharma (prasad babu) gets into their trap and leaves home. Utpala reaches jaani for help to talk to her brother. Jaani discovers that the phone number given to contact her brother is in the same city and starts exploring into this. Meanwhile Radha lodges a complaint against gollapudi and his son, sudhakar about their dark secrets. Salim (Ranjeeth), a left hand of suresh oberoi, disguises himself as a police and asks radha to come with him for enquiry.When he attempts a rape, Jaani saves her and both fall in love and also start exploring Oberoi’s kingdom. They discover that prasad, escaped from oberoi’s den and left a letter with Utpala, explaining every activity in underworld.But Prasad, the lone witness of underworld, is killed in hospital by Salim. When Jaani and Radha attack Oberoi, they’re captured and left in a desert as a prey for vultures. But using a magnifying glass, dropped by gollapudi, they free themselves and attack oberoi. In the final clash, nagababu is killed, trying to save jaani. Furious jaani kills salim and oberoi. Jaani marries Radha, and is shown travelling with kids.