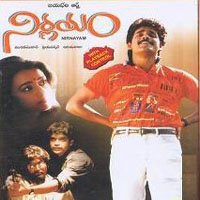 Nirnayam is a 1991 Telugu action-drama film directed by Priyadarshan, produced by D.Kishore on Jayabheri Art Productions banner, presented by M.Murali Mohan. Starring Akkineni Nagarjuna, Amala Akkineni in lead roles and music composed by Ilaiyaraja. The movie was dubbed in Tamil and Hindi languages as Sambavam and Girafthari respectively. This film is a remake of Priyadarshan’s own 1989 Malayalam film, Vandanam starring Mohanlal.

Nirnayam Story Akkineni Nagarjuna plays the role of a sincere Cop, Vamsi Krishna, who is sent undercover along with two other cops. Of which one cop is a close friend and associate to Vamsi played by Subhalekha Sudhakar, by Police Commissioner played by Giri Babu to track down a vicious and dangerous criminal named Raghuram played by Murali Mohan. Vamsi performs surveillance on Raghuram’s daughter Geetha played by Amala, by getting into Geeta’s opposite building’s flat in a Residential complex, to gather details and whereabouts of her criminal father. Geeta lives with her aunt played by Sukumari. When Vamsi in guise of a telephone department inspector, pursues her and falls in love with Geetha, she reciprocates Vamsi’s love interest initially but refuses him after she gets to know the truth that he’s a Cop and is about to drag her father to prison. The rest of the story is about how Vamsi gets hold of Raghuram through Raghuram’s daughter Geetha and what facts he learns about the crime operation of the real Criminal played by Sharat Saxena who deceives Geetha’s father Raghuram who is actually an innocent victim, and in the process how the misunderstanding between Geetha and Vamsi gets cleared up, how Vamsi banishes the real criminal. The plot of the movie was inspired by the American movie Stakeout.