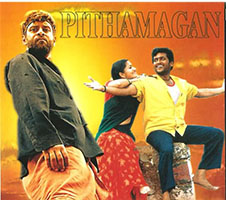 Pithamagan Story: An anonymous woman dies while giving birth. Her child is found and raised by the caretaker of the graveyard. The child, named Chithan, grows up among corpses with minimal human contact is perhaps more feral than autistic. He growls like a wolf, runs like an gorilla has the unkempt appearance of an orangutan but he seems to understand loyalty and is despite his circumstance, a social animal. He ventures into a town in search of food and gets into trouble as he doesn’t understand the concept of money. He is rescued by Gomathy, a petty Ganja seller. She sees his ability to be loyal and enrolls him into the service of her employer, a large scale ganja producer. Chitan is caught during a drug raid and sent to jail.

Shakti is a conman with a silver tongue.He gets into trouble when he cons Manju into losing all her personal effects in a game of dice. Shakti gets sent to jail thanks to Manjus detective work.Shakti meets Chitan in jail and starts protecting him out of sympathy and pity. Chitan starts to reciprocate to Shakthi’s kindness with the only way he knows, by being as loyal as a dog.

Shakthi serves his term and then butts heads with the Ganja producer to get Chithan out of jail as well. Chithan gets out but commits a crime when he obeys his masters instruction to burn the body of a murder victim. Shakthi realizing that Chitan is being used as accessory in crimes he cannot comprehend, prevents Chitan from going back to working in the ganja fields. At the same time, a budding romance starts between Shakthi and Manju. Chitan too starts to see a shared spirit in Gomathi.

The Police catch a wind of the murder and arrest Chitan. Shakthi gets Chitan to side with the police and goes against the Ganja producer. The Ganja producer attacks Shakthi when Chitan isn’t around. The Ganja producer kills Shakthi and dumps his body in the middle of the road. Chitan doesn’t understand that Shakthi is dead and zones out to outer space when all around him Gomathi, Manju and the others are crying and beating their chests in agony. Gomathi sees Chitan’s confusion as indifference and she angrily drives Chitan away from Shakthi’s body.

Chitan slowly starts to understand that Shakthi is dead as he sees him on the funeral pyre. His realization is complete when he wakes up in the morning next to the burnt remains of Shakthi’s corpse. He experiences emotions he has never experienced before: fury, agony, betrayal and emotional pain that he has never felt. His body bears the scars of a million bruises and his violence has always been self-defence and the defence of his masters.This realization of the meaning of death and the pain of losing a loved one breaks the feral chains that had wound up on his psyche.

Chithan sets out like a man intent on destroying the world. He sets fire to the ganja fields, lets the Ganja producer experience the pain of his loss and then sets upon destroying him physically.He drives him through the street, taking his time breaking a few bones at a time till he is done toying with him. Then he kills him and offers his body as a tribute to Manju who now has lost her will to live.

Gomathi realizes what Chitan has been through and tries to get him to stay but Chitan turns back to the world of the graveyard among the corpses that cannot hurt him anymore.