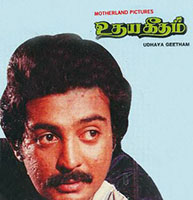 Udhaya Geethan Story: Arun (Mohan), a prominent singer is in jail with a death sentence looming over his head. He meets Shanthi (Revathi) during one of his concerts, and is followed by her on many occasions into the jail and outside too. He shows nothing but animosity towards her behavior, and keeps pushing her out of sight. But Shanthi is persistent and does not give up either. An inmate named Maari attempts to escape from jail, but he is stopped by Arun. Maari later tells Arun about his sick daughter (Shekhina Shawn), and his inability to pay for her operation. Arun sympathises with him, and promises to raise funds for the sick child through his next concert, which he also plans shall be his final one.

Leela Chowdhry (Lakshmi) is the newly appointed Superintendent of Police for the Madras Central Jail and is merciless. Shanthi, with her smartness, talks Leela into getting her married to Arun. Arun also agrees to it after a lot of thought and deliberation. Leela arranges for the wedding to take place in her home. During their first night, Shanthi stabs Arun’s stomach and explains that she is the sister of Anand (Anand Babu), whom Arun was accused of killing. Arun and Anand sang and danced for a music troupe before Anand’s murder. Arun explains his side of the story in pain and proves his innocence to her. Shanthi, realising her mistake, now starts to set things right.

Leela allows Shanthi and Arun to go to a nearby temple, but sends policemen along with them to prevent Arun from escaping. Shanthi outsmarts them and takes Arun to her home where she imprisons him, much to his dislike. She makes it impossible for him to escape, until she is able to prove his innocence. Leela is later punished for having let Arun “escape”, and simultaneously realises that Arun is her long lost son, becoming heartbroken. However, she remains bound to her duty of capturing Arun, and a manhunt for him begins.

Shanthi later meets Shankar (Prathapachandran), the real killer of Anand. He confesses to the murder, but states that did so because he witnessed Anand sleeping with his wife (J. Lalitha). Shanthi, knowing that Shankar’s wife is a women who has affair with multiple men (it was she who seduced the reluctant Anand), takes him to her and Shankar is angered on seeing his wife with another man in bed. He kills her, but not before she fatally stabs him. Arun, now having escaped from custody, is confronted by Leela who he realises is his mother. She allows him to perform his final concert which he had earlier planned to raise funds for Maari’s sick daughter, but has to have him hanged to death him after that. Right after he finishes his concert he is arrested, but Shanthi and Shankar finally arrive and tell the truth about Anand’s death, after which Shankar succumbs to death. Arun’s death sentence is cancelled, and he returns to his normal life.