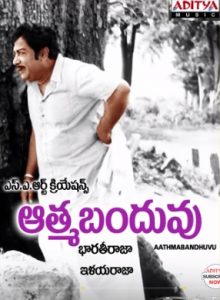 Aathma Bandhuvu is a 1985 telugu feature film directed by P. Bharathiraja. It starred Sivaji Ganesan and Radha in the lead with Vadivukkarasi, Ranjani, Aruna Mucherla, A. K. Veerasamy and Sathyaraj playing other significant roles. The film’s score and soundtrack are composed by Ilayaraja.

The film was critically received upon release. It fetched Best Lyricist Award and Best Feature Film in Tamil Award for Vairamuthu and Bharathiraja respectively at the 33rd National Film Awards. While the lead actors won their respective Filmfare Awards South in Best Tamil Actor and Best Tamil Actress category.

Kuyil role was first offered to Radhika, but she choose to do Swati Mutyam which was offered to her at the same time.

Story: Aathma Bandhuvu commences with friends and family of an ailing village head, Malaichami (Sivaji Ganesan), gathered around him on his death bed. The plot then moves along in a series of flashbacks, featuring significant episodes of the dying man’s life. These include the presence of a boatman’s young daughter Kuyil (Radha) in his village. The protagonist is unhappily married to a shrewish wife by the name of Ponnatha (Vadivukkarasi), and seeks comfort and solace in a friendship with Kuyil. The friendship raises eyebrows, and is socially awkward and complicated for both Malaichami and Kuyil.