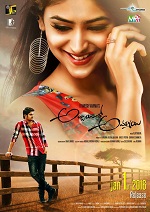 A young man and woman are Facebook friends, they don’t know each other but continue to be in touch. They both fall in love not knowing they are the same friends on FB with fictitious identity. Somewhere along the line, the man comes to know the woman he loves is the same person who is his best friend on FB, yet he refrains from revealing his identity. Why he does that drives the entire plot to its finale. Two wooden dolls that were used as publicity tools for the film hardly find place in the film, save for the prelude.

The plot isn’t as simple as it looks. The lead pair get intimate in their parents absence and when the latter get to know they kick them out of their homes. The heroine is given shelter in the hero’s home and her parents who couldn’t stand the sight of him until then, encourage him to woo their daughter once more. It gets outrageously silly from then on. The moment a comedy track is introduced in the first half of the film, you know what will happen next. Logically, if a man and woman are dating, they would recognise each other’s voice, but here, the two chat on the phone, though with a different identity, without changing the SIM and still don’t recognise each other! The hero who goofs up as a lover, tries to make up for it as a friend by sending her a pizza, paying her college fee, buying books and helping her to get an admission in a top University. The heroine pays a tribute to the obvious and oblivious pal at the convocation.