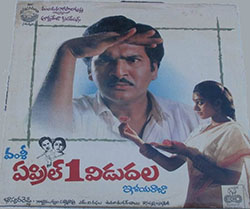 April Okati Vidudala is a 1991 Telugu, Comedy film produced by P.V.Bhaskar Rao on Poorna Teja Creations banner and directed by Vamsy. Starring Rajendra Prasad, Shobhana in the lead roles and music composed by Ilayaraja. The film recorded as Super Hit at box office. The film is remade as Tamil Movie Sathyavaan with Murali and in Kannada as Mr Harishchandra starring Mohan and Anu Prabhakar.

Story: April Okati Vidudala Story starts with Divakaram (Rajendra Prasad) coming late to video-shoot a marriage, where he sees Bhuvaneshwari and falls head over heels in love. He then gets a hold of Bhuvaneshwari’s maternal uncle VP Jagannatham (Pradeep Shakti) and gets information about Bhuvaneshwari. He gathers that she respects only the people who are self-sufficient and straightforward. He also finds out that she is not married and is about to get transferred to Rajamundry (where he stays) soon. She works as a railway booking clerk. So Divakaram comes back to the Rajamundry and gets permission from the doctor (Shubha), who raises him as her foster child to use the front veranda in her house for his video shop. In order to secure the capital he uses all kinds of tricks. He blackmails Bhagyam (Jayalalita), cheats Chinna Rao (Mallikarjuna Rao) and claims a chit which he never was a member of, and so on. Finally starts the video shop. That’s when Bhuvaneswari enters the scene. All the while Jagannatham writes him letters in her name making Divakaram assume that she is in love with him. Finally when she lands in Rajamundy he approaches for marriage. It’s then that he realizes that he had been cheated by Jagannatham. Meanwhile, she finds out all of Divakaram’s mischief through the neighbours. To teach him lesson, she puts forward a deal that she would marry him only if he stays out of cheating, and does not utter a lie in a month. Divakaram goes for it.