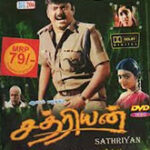 Chatriyan (transl. The Warrior) is a 1990 Indian Tamil-language crime drama film, written and produced by Mani Ratnam under Aalayam Productions. The film was directed by K. Subash, an assistant of Mani Ratnam. The film stars Vijayakanth, Bhanupriya, and Thilakan while actress Revathi made a guest appearance as Vijayakanth’s wife. The film has Vijayakanth playing Selvam, an honest cop, and Thilakan as Annachi, a corrupt politician and mobster in the main villain role.

This film ran more than 150 days in some theatres and was declared a blockbuster at the box office. The film is one of the biggest hit films of the early 1990s and has attained cult status. It was also dubbed into Telugu as Kshatriyudu. The film features a highly acclaimed soundtrack and background score composed by Ilaiyaraaja. Theri, released in 2016, Directed by Atlee Kumar is tightly based on Chatriyan

Chatriyan Movie Story: ACP Panneer Selvam aka Sathriyan (Vijayakanth), an honest cop, gathers enough evidence against a local goon named Arumai Nayagam aka Annachi (Thilakan). Annachi is sent to prison. He avenges his arrest by killing Sathriyan’s wife Jaya (Revathi). Since then, Sathriyan quits the police force and takes care of his children, renting an apartment owned by V. K. Ramaswamy. Banu (Bhanupriya), the apartment owner’s granddaughter, gets introduced to Sathriyan’s children and starts mingling with them, eventually falling in love with Sathriyan. Meanwhile, Annachi is released from prison and realizes that he does not carry the same respect as he used to before going to jail. Annachi challenges Sathriyan to join the police and fight him again. Sathriyan initially rejects the offer. Annachi tries to provoke Sathriyan by attacking his home and son. Out of frustration over his son’s attack, Sathriyan joins the police and fights Annachi. Sathriyan’s fight against Annachi forms the rest of the plot.