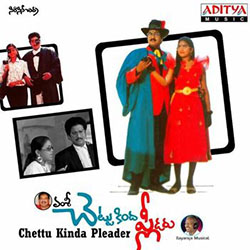 is a 1989 Telugu comedy thriller film, produced by Nandigam Surya Ravindra under the Siri Cine Chitra banner and directed by Vamsy. It stars Rajendra Prasad, Kinnera, Urvashi in the lead roles and music composed by Ilaiyaraaja. The film is a remake of the Malayalam film Thanthram (1988) and it recorded as a Super Hit at the box office.

movie about Gopala Krishna (Sarath Babu) a self-made businessman leads a very happy family life with his wife Sujatha (Urvashi) & son Nani (Baby Raasi). He has conflicts with his father Sarabhayya (Gollapudi Maruti Rao), that why he keeps him away. Unfortunately, Gopala Krishna dies in a car accident. After his death, Sarabhayya files a case in the court that Sujatha is not Gopala Krishna’s wife and she should hand over the property. No reputable lawyer accepts the case when an advocate Balaraju (Rajendra Prasad) without practice takes up the case. But Sarabhayya destroys all the proofs which show that Sujatha is Gopala Krishna’s wife and his henchmen twice strike Balaraju very badly. In the beginning, frightened Balaraju decides to leave the case but after some time, seeing the situation of Sujatha he gets back. Now comedy crime thriller begins, Balaraju segregates all the proofs against Sarabhayya with help of his cousin Krishna Kumari (Kinnera). In that process, Balaraju faces many obstacles but he succeeds in unfolding the mystery behind the Gopala Krishna’s death that he was murdered by Sarabhayya who is his step-father. Meanwhile, Sarabhayya kidnaps Sujatha & Nani, Balaraju protects them and sees the end of Sarabhayya. Finally, the movie ends on a happy note with the marriage of Balaraju & Krishna Kumari.