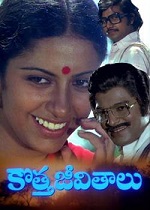 Jyoti, a school teacher, falls in love with Gopal, an honest man. What happens when Raju, a wealthy landlord, tries to ruin their relationship with an intention of marrying Jyoti?