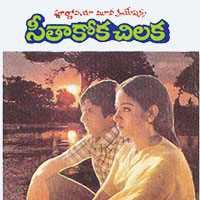 Seethakoka Chilaka (transl. Butterfly) is a 1981 Indian Telugu-language romance film created by Poornodaya Movies and directed by Bharathiraja. After it was remade from the Tamil version Alaigal Oivathillai, Karthik Muthuraman reprised his role from the original film. Aruna Mucherla is the female lead character. The film was premiered at the 9th International Film Festival of India.

Raghu (Karthik) and the men of his village roam the village teasing girls. One day Karuna (Aruna) enters the village. Raghu and his friends make mischief with her but when they come to know that Karuna is David’s (Sharath Babu) sister they become afraid of her. Raghu’s mother is a classical music teacher. Karuna wants to learn classical singing hence she goes to Raghu’s house. Slowly Raghu and Karuna fall in love with each other. When Raghu’s mother comes to know about their love she warns Raghu about the difference between him and Karuna. Karuna belongs to a Christian community whereas Raghu is a pure Hindu. Moreover, Karuna’s brother David is a heartless person who may even kill Raghu for loving Karuna. But Raghu and Karuna explore their love even when all the villagers are against them. They leave the village to fly to their lovely world, like butterflies, hence the title Seethakoka Chilaka.