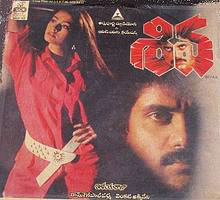 Shiva Story: A man named Siva comes to Vijayawada from a nearby town to pursue further education. He lives with his brother Sharath’s family and joins the VAS college of Arts & Sciences. Though Sharath and his daughter Keerthi bond well with Siva, his wife considers him a financial burden. At the college, Siva befriends a group of students and falls in love with Asha, the sister of an honest police inspector Venkat.

The college’s (unopposed) student union preident J. Durga Rao aka J. D. is the lowest rung in a gang ladder that reaches througha gangstrer Ganesh to Bhavani, a reputed crime boss. Bhavani uses this network to support his mentor Machiraju, a politician. Though the police arrest J. D. many times for the atrocities he commits, he is bailed out by Bhavani every time. When J. D. teases Asha in the college campus, Siva attacks him with a cycle chain and develops rivalry with him and Ganesh.

The incident encourages Siva’s friends to request him to contest for the student union president elections. Siva suggests to nominate Naresh, one of the group, for the post. Ganesh’s attempts to pacify Siva fail, and Bhavani comes to know about him. Bhavani considers Siva a potential replacement for J. D.; He is annoyed that J. D. seeks his help for every small issue, and is a weak henchman.

Naresh is fatally assaulted by J. D. and Bhavani’s hanchmen and is admitted into a hospital for treatment. Siva retaliates, making Bhavani furious. Siva’s friends attend a wedding, and are attacked by Ganesh and others. Malli, one of Siva’s friends, is murdered and Siva swears revenge. Sensing risk for Sharath’s family after an attempt to kill Keerthi, Siva leaves the house and joins his friend Chinna’s hostel.

Siva agrees to contest as the college’s student union president. On the other hand, Bhavani cheats the workers union leader Krishna Reddy, who shifts his loyalties to Siva. Around this time, Asha and Siva get married. Bhavani starts attacking and murdering Siva’s close aids, which makes him manage to transfer Sharath to Vishakhapatnam. He also manages to attack Bhavani’s henchmen and helps Venkat in arresting Ganesh.

Machiraju finds Siva a potential replacement to Bhavani, and decides to stop supporting the latter. Bhavani comes to know that Siva maintains a healthy relationship with Sharath and kidnaps Keerthi. Ganesh is produced into the court and an arrest warrant is issued on Bhavani. Insulted and humiliated, Bhavani kills both Keerthi and Machiraju. Siva and Bhavani duel on the terrace of a shopping complex. Bhavani commits suicide and Siva walks out, as Asha and Venkat watch in dismay.