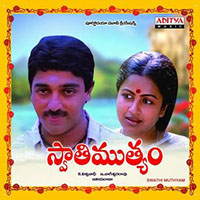 Swati Mutyam Story Shivaiah (Kamal Haasan), an orphan and a mentally Challenged person, lives along with his grandmother (Nirmalamma) in a village. In that village Lalitha (Raadhika), an young widow with a 5-year old son, lives along with her brother’s family. She and her son often get abused by her sister-in-law but Lalitha, having no where to go bears it all.

Shivaiah often encounters Lalitha and gets appalled by her condition. One day, during Sri Rama Navami festival, Shivaiah marries Lalitha, shocking all the villagers. His grandmother approves of his marriage as she has much sympathy and regard for Lalitha. But his uncle and orthodox villagers oppose that marriage as they consider remarriage of a widow was a sin. In that brawl, Shivaiah’s grandmother dies leaving innocent Shivaiah in the hands of Lalitha. Lalitha, moves in with her husband with the blessings of her brother.

Some of the villagers help them to build a new life. Gradually Lalitha makes Shivaiah understand the household duties and responsibilities of a man. Shivaiah finds work and starts to support his wife and step son. Later they have son and live happily for long time. Years pass and Lalitha becomes ill and dies in her husband’s arms. In the climax, Shivaiah walks out of his house surrounded by his children and grandchildren. He carries a tulsi plant which was his memory of Lalitha’s love.