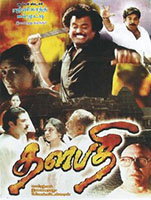 Thalapathi Story: Surya (Rajinikanth), the abandoned child of fourteen-year-old unwed mother Kalyani (Srividya) is brought up by a generous lady living in the slums. He grows up to become a hot tempered youth who fights the injustice that takes place daily. These qualities lead him to cross swords with the local don Devarajan (Deva) (Mammootty). Deva’s friend Ramana is fatally beaten up by Surya, and Deva threatens that if his friend was laid to rest then he will kill Surya. Ramana succumbs to his wounds, and Surya is imprisoned. However, when Deva discovers Ramana’s offence, he decides to get Surya released from jail.

Surya is surprised to see Deva send his man to get him out from jail, and there he tells Surya, Nyayamnu onnu irrukku (there is such a thing called justice). From that moment, Deva surrenders his ego and offers his hand of friendship to Surya. Surya pledges that he has nothing else but his life to give his new friend. From then on Deva makes Surya his “Thalapathi” (commander). Meanwhile Surya falls for a local girl Subbulakshmi (Shobana). They soon fall in love and their relationship continues. Surya and Deva virtually rule the town with their muscle and their sense of justice, but in the eyes of the government they are anti-social elements. Arjun (Arvind Swamy), posted as the new district collector, plans to arrest both so that he can end their brutal activities. But his opportunities are futile.